“The pearl of wisdom is already hidden within the shell of the ocean of the heart. Dive deep and one day you will find it.”  – Sufi sage 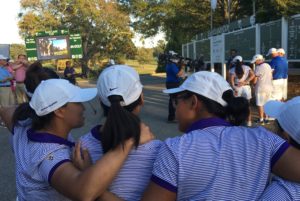 Something extraordinary happened for the University of Washington Women’s Golf Team recently at the East Lake Cup, a prestigious invitational including the semifinalists in from that year’s NCAA Championship.

We woke up…on a national stage.

And we learned that a pattern of poor performances (a slump) can be turned around in a relatively short amount of time.

Arriving at the historic East Lake Golf Club, the conditions were in place for a deluge of struggle and big numbers.

Pressure presents us with a tremendous opportunity to learn. It can bring out the best in a player, it can also bring out and expose fears and various interferences that don’t present themselves on the driving range or during a practice round. The potential for embarrassment and failure are ramped up significantly and bring costly interferences to the surface. Each player has their own brand of interferences, while the players may have their own take on what to call theirs, I believe fear was the most prevalent. What do I mean by fear? Fear of failure. Fear of letting down coaches, teammates, parents, their communities and their school. Fear of not being able to live up to expectations. Fear of embarrassment. Fear that they aren’t good enough. And all of this boils down to a fear of a bad shot and the resulting mental and physical tension that costs strokes.

Those fears led to an ugly outcome in the first round, which was played for an individual title and seeding for the next two days of match play. Here are the results from Monday’s stroke play round.

That result left us with a rematch of the National Championship finals with Stanford, who had just bested us by a total of 44 strokes. After Coach Mulflur finished those undoubtedly difficult post-round television interviews, it was time to go to work on turning things around. And it seems we did, as chronicled by Ryan Lavner in his nice Golf Channel article: Washington stuns Stanford to reach finals.

Most golfers (including you) are frequently asleep while playing a round of golf, or practicing on the tee line. Fall “asleep” when you lose connection with the present moment. If you are still trying to get your mind around what I am proposing, here are some indications that you are asleep:

The Washington Women’s Golf Team displayed several of the above indications from this list during the Monday stroke play round. The Huskies are young, but our three sophomores, Julianne Alvarez, Sarah Rhee and Wenyung Keh are experienced and know what it is like to play with freedom under huge pressure. They worked deeply (along with the other players and coaches) for months last spring on identifying and eliminating the interferences that stood in the way of their goals, and that work was a big part of the victory at the National Championship. But interferences have a way of resurrecting themselves and in order to perform at the highest level with consistency, vigilance is necessary. For the team, the interferences mushroomed into a bloody first round. Thankfully, level of self-awareness that has been cultivated by Coach Mulflur and the players provided the platform for the awakening we experienced on Tuesday.

So how did we make such a big turnaround? This post would become way to long if I broke the entire process down, but here is a snap shot.

The team is now in the “off-season” and is planning to deepen the roots of learning that we experienced in Atlanta. They will be engaged in Mindful Golf Training as well as strengthening their bodies in the gym and minds in the classroom. Our next event is in February at the Regional Challenge in Palos Verdes, California and you can be sure that we will be committed to playing with joy, awareness and a commitment to learning – the ingredients of success.